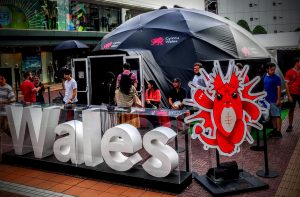 The centrepiece of the visit, the 9-metre ‘Wales Dome’, was situated at the Shinjuku Station in the heart of Tokyo. As the visit coincided with the 2019 Rugby World Cup in Japan, the Welsh showcase saw a great deal of footfall – and Flamgard’s team had the chance to see the Welsh national rugby team play live against Australia!

The immersive, 360-degree experience of the Wales Dome provided visitors with a chance to enjoy Welsh culture, and learn more about local business. Welsh exports to Japan were worth almost £250 million in 2018, and Wales has exported nearly £1 billion of goods to Japan in the last five years.

The trade mission also involved a reception at the UK Embassy in Tokyo, where business representatives and politicians from both countries spent the evening networking and strengthening the relationship between the regions.

Wales and Japan enjoy a long-term partnership, both in business and in culture. Wales Millenium Centre permanently displays work by Japanese artist Takumasa Ono, and Conwy Castle, North Wales, has recently been twinned with Himeji Castle in Hyōgo.

Commenting on the visit, Shuresh Maran said: “Flamgard is a proud Welsh business, so we were immensely pleased to be invited on the trade mission to Japan. It was a brilliant chance to show local businesses the opportunities of working with Welsh companies, and we had great conversations throughout the trip. The chance to see the Welsh rugby team play at the Ajinomoto Stadium certainly didn’t go amiss, either!”

Flamgard Calidair provides specialist HVAC equipment for use around the world – to learn more about the bespoke solutions on offer, contact the team today.