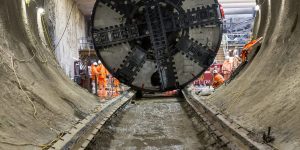 Laing O’Rourke’s work on extending London’s underground Northern Line will see the creation of two new tube stations (Nine Elms and Battersea Power Station), with tunnelling work being completed toward the end of 2017.

Flamgard’s high integrity tunnel dampers have been selected for use on the site; the dampers are designed to restrict flow of hot smoke and flames should a fire break out in the underground environment, and can also be used to assist in the flow of fresh air to the tunnels.

“This incredible engineering project is worth around half a billion pounds,” explains Flamgard Calidair’s managing director Steve Edwards, “so it’s a real honour to be selected for such a prestigious scheme. Over 300,000 tonnes of earth was excavated from the site, helping to create the first significant extension to London’s underground in 20 years. The new stations will serve a new embassy district in London and we’re delighted we can contribute to the safety of the thousands of passengers that will end up using this line.”