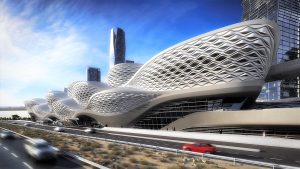 Flamgard Calidair has been appointed to supply tunnel dampers to the landmark Metro project in Riyadh, Saudi Arabia.

Flamgard’s aspect of the project covers lines 1 and 2 of the prospective underground network, forming a part of a six-line metro that will feature 85 stations across over a hundred miles of track.

Working with the BACS consortium – a group of businesses responsible for the design and construction of the two lines – Flamgard Calidair will be supplying tunnel dampers to help regulate the flow of air in the underground system, as well as providing protection in the instance of a fire. Tunnel dampers can be used in emergency conditions to extract toxic fumes and smoke away from the critical area as well as providing a fire barrier when closed (in temperatures of 400°C for up to two hours).

Steve Edwards, managing director of Flamgard Calidair, comments: “Infrastructure projects like these can help to revolutionise transport, helping citizens, the environment and businesses alike. Riyadh is a fast-growing city and needs a modern transport system – we’re proud to be helping to ensure it operates safely and smoothly.”

The $23bn underground system forms part of a public transport project aimed at reducing the number of car trips within the city by as many as 250,000 per day, and will feature a completely automatic and driverless monorail system. It is due to open fully in 2021.