Home » News/Blog » What is a Blast Damper?

What is a Blast Damper? 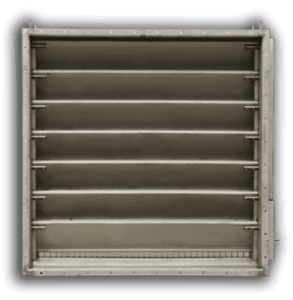 A damper in any situation is generally there to prevent something unwanted travelling through a building’s ductwork, while day-to-day permitting clean air to pass with minimal interference, or pressure drop.

In many buildings, smoke and fire dampers are located within ductwork, especially in underground or enclosed areas, so that if a fire breaks out somewhere the ducting doesn’t act as a channel to spread it throughout the structure.

There are industries, however, when smoke and fire are only a part of the risk in an industrial accident, and that’s where blast dampers come into their own.

Just as a smoke damper blocks off the passage of hazardous fumes when activated, so a blast damper can prevent powerful forces from being transmitted through the ductwork. Naturally, speed is of the essence in these situations; where explosions are concerned there’s no time to be pressing switches or relying on elaborate control systems. Blast dampers – often louvred or bladed – generally utilise the tension of a powerful spring to remain open. When pressure from a blast overcomes the resistance offered by the spring, the damper is closed and the blast halted in its tracks.

Flamgard Calidair’s blast dampers are rigidly constructed and fully welded, comprising a dynamic debris catcher that directs the blast onto the blade pack. This consequently closes under blast pressure, isolating the blast force and preventing blast damage or loss. The blade open position is adjusted and held by a ‘blast break’ mechanism, ensuring safety and reliability of the system.

Many of our blast damper customers are businesses with a need to protect equipment and personnel of control rooms and accommodation in petrochemical and industrial process facilities, both onshore and offshore, and in the nuclear power industry.

Check out our blast damper video here for more information.